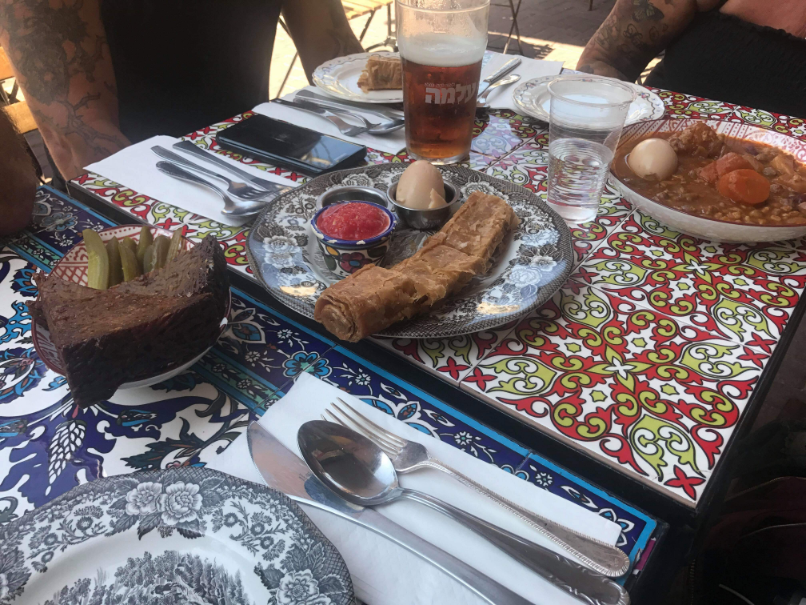 In Israel the Sabbath is strictly observed.  Due to the fact that no one is allowed to do any work (including cooking) there are very few restaurants open.  Meals are prepared the night before that can be eaten cold or warmed up.

We happened to arrive in  Jerusalem on the Sabbath and hungry!  In search of food we found one Lebanese cafe serving traditional Shabbat food. This consisted of: Noodle Krugel, Cholent (type of Jewish stew) and pastries!

Onwards in our journey to Jerusalem. 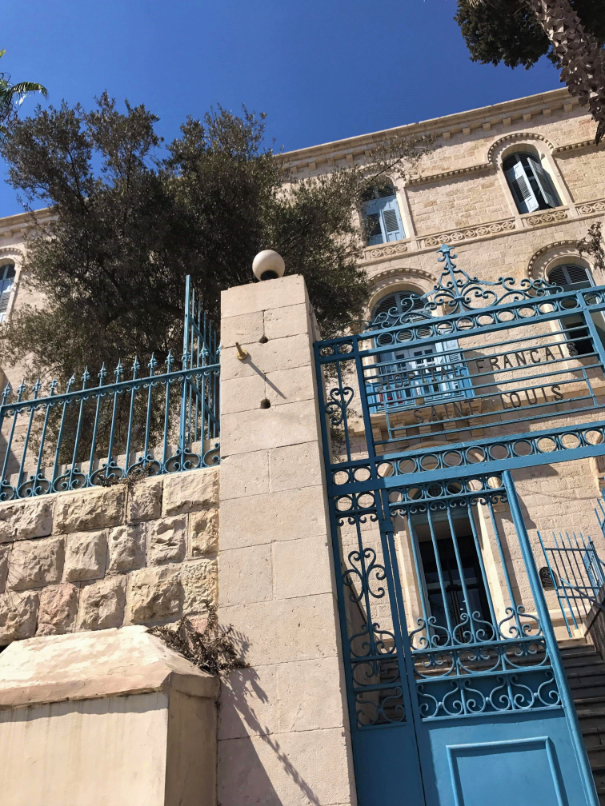 Matthew 25:36  I was naked and you clothed Me; I was sick and you visited Me; I was in prison and you came to Me.’

Between West and East Jerusalem, facing the Old City stands the Saint Louis French Hospital.  Since 1852, the Sisters of “Saint Joseph of the Apparition” have operated the hospital which now specialises in palliative care for Jewish, Christian and Muslim patients with terminal illness. 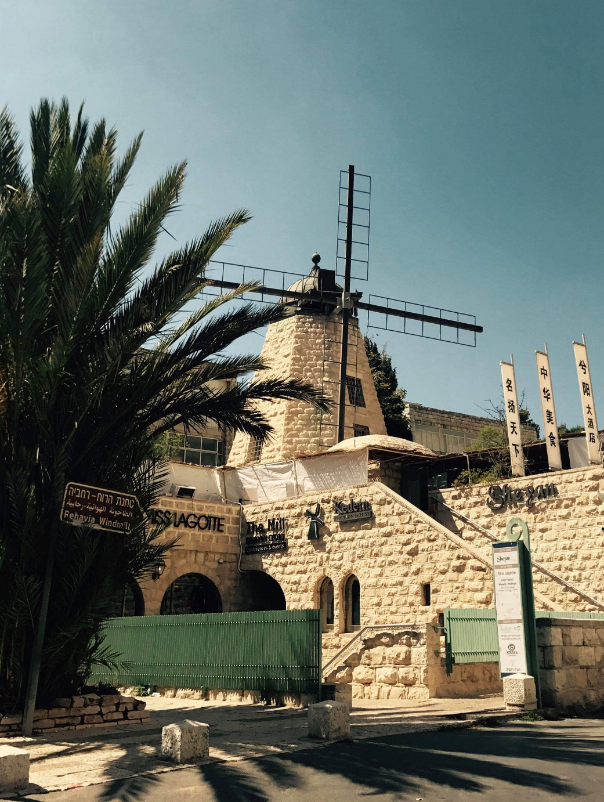 Mark 14:7  For you have the poor with you always, and whenever you wish you may do them good.

Rehavia Mill was built by the Greek Orthodox Church to provide flour and bread to the poor, this mill used a combination of engine-power and wind. When the steam-powered one began to operate in the German Colony in 1873 it went out of use. Today it is a small shopping centre. 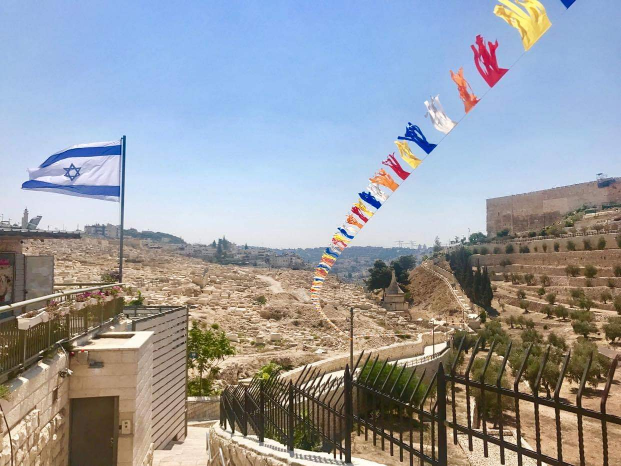 John 18:1 When Jesus had spoken these words, He went out with His disciples over the Brook Kidron, where there was a garden, which He and His disciples entered.

The Kidron Valley separates the Mount of Olives from the eastern wall of the Temple Mount and carries on all the way to the Dead Sea, a total of 20 miles. The Gihon Springs naturally filled this valley, but early inhabitants of Jerusalem diverted the water into pools and channels to be used by the city.  The Kidron is mentioned 11 times in the Bible including the time King David fled across this valley to escape his son Absalom in 2 Samuel 15:13-30.  Today there are many tombs and graves in the Valley. 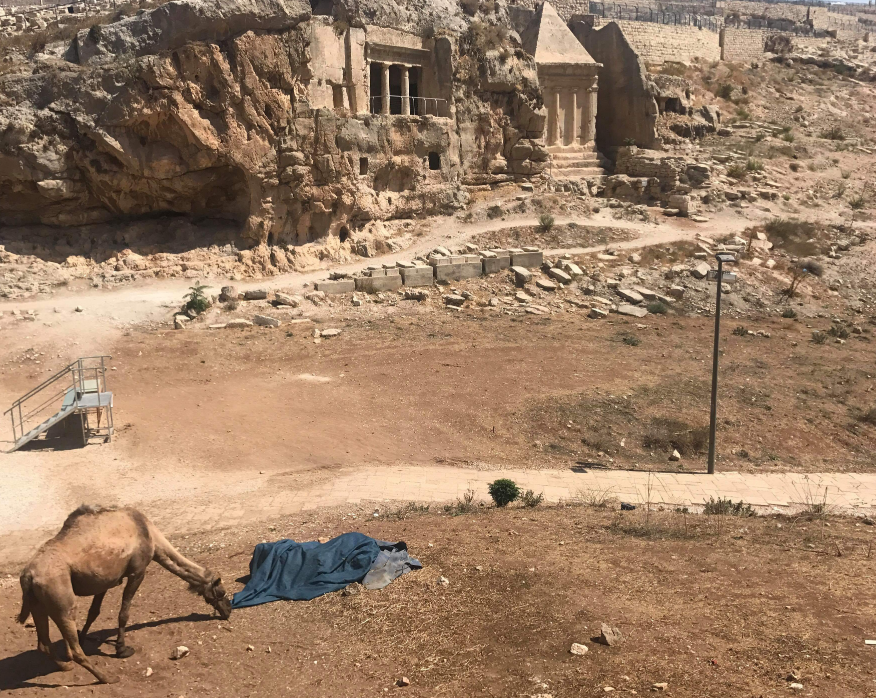 2 Samuel 18:18  Now Absalom in his lifetime had taken and set up a pillar for himself, which is in the King’s Valley. For he said, “I have no son to keep my name in remembrance.” He called the pillar after his own name. And to this day it is called Absalom’s Monument.

Absalom's Tomb in the Kidron Valley

Absalom's tomb can be seen in the top, centre, right of the picutre, whilst a camel desperately strains to eat of the hay under the blue blanket 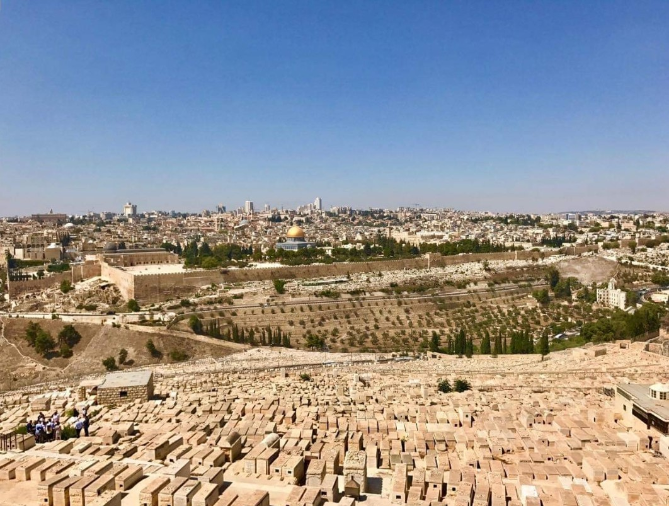 The Mount of Olives separates the Judean Desert from the city of Jerusalem. It is now a Jewish cemetery, but prior to this it was a place of prayer.  King David would often prostrate himself there. The Jewish cemetery on the Mount of Olives is the largest and most important Jewish cemetery in the world, extending over 250 acres and contains the tombs of the infamous dead of the nation for over 3,000 years. They are buried there as Jewish tradition dictates that the beginning of the resurrection process will take place on the mount at the end of days and that those buried on the mount will be the first to arise to everlasting life.

The Mount of Olives

Looking across from the Mount of Olives to the Old City of Jerusalem, the Jewish graves in the foreground 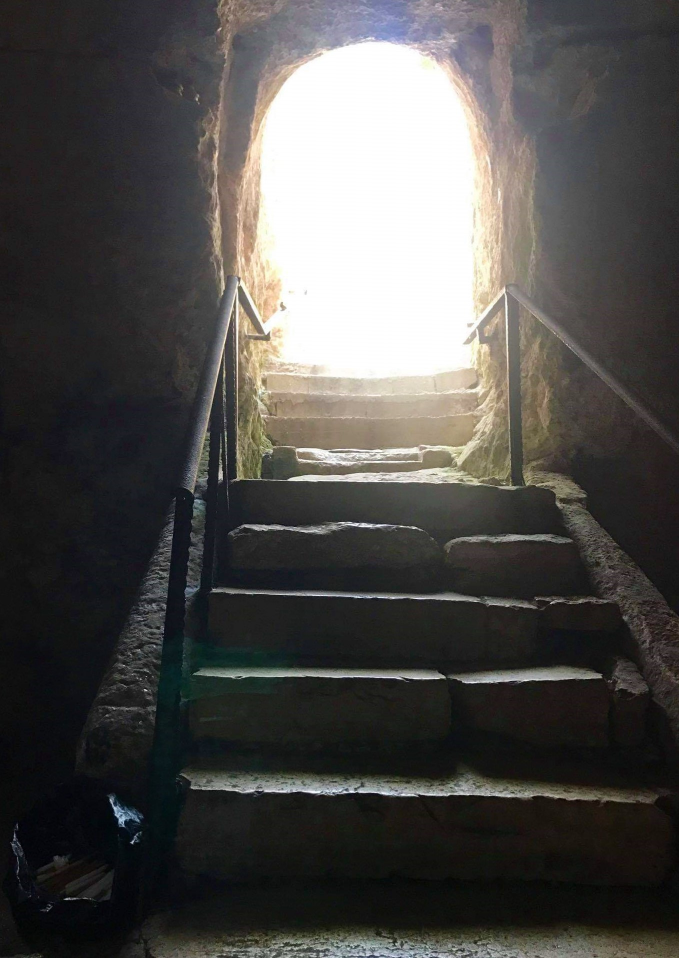 The ‘Tombs of the Prophets’ are a catacomb. Inscriptions above the burial places show that the tombs were used for the burial of foreign Christians in the 4th and 5th centuries AD.  The catacomb has an unusual plan, with a central circular chamber and radiating fan-shaped corridors leading to the burial places (kokhim). On entry you recieve a candle to walk the route to the open graves.

Inside the Tomb of the Prophets

An eerie experience but a welcome relief from the heat outside. 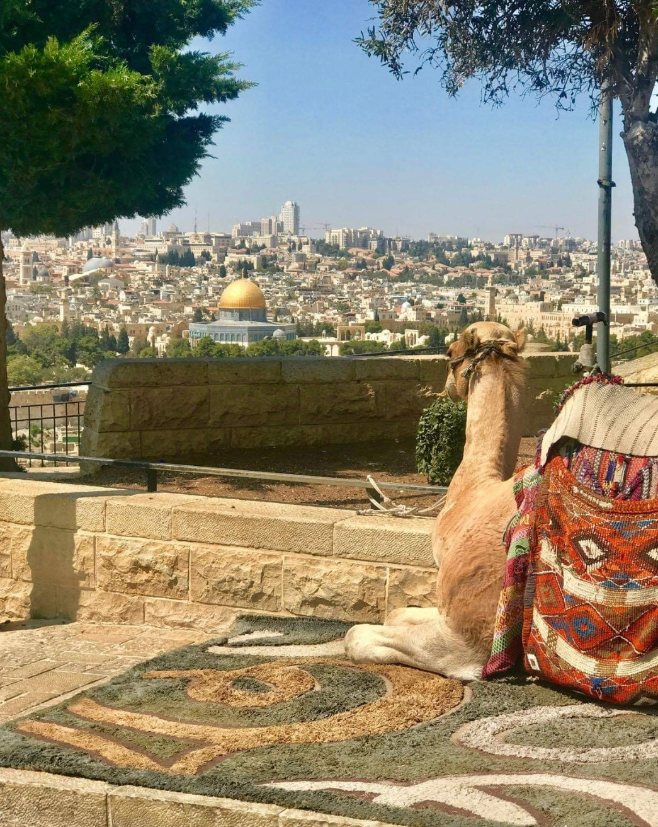 Psalm 122:6  Pray for the peace of Jerusalem: “May they prosper who love you. Peace be within your walls, Prosperity within your palaces.”

Camel resting on the Mount of Olives 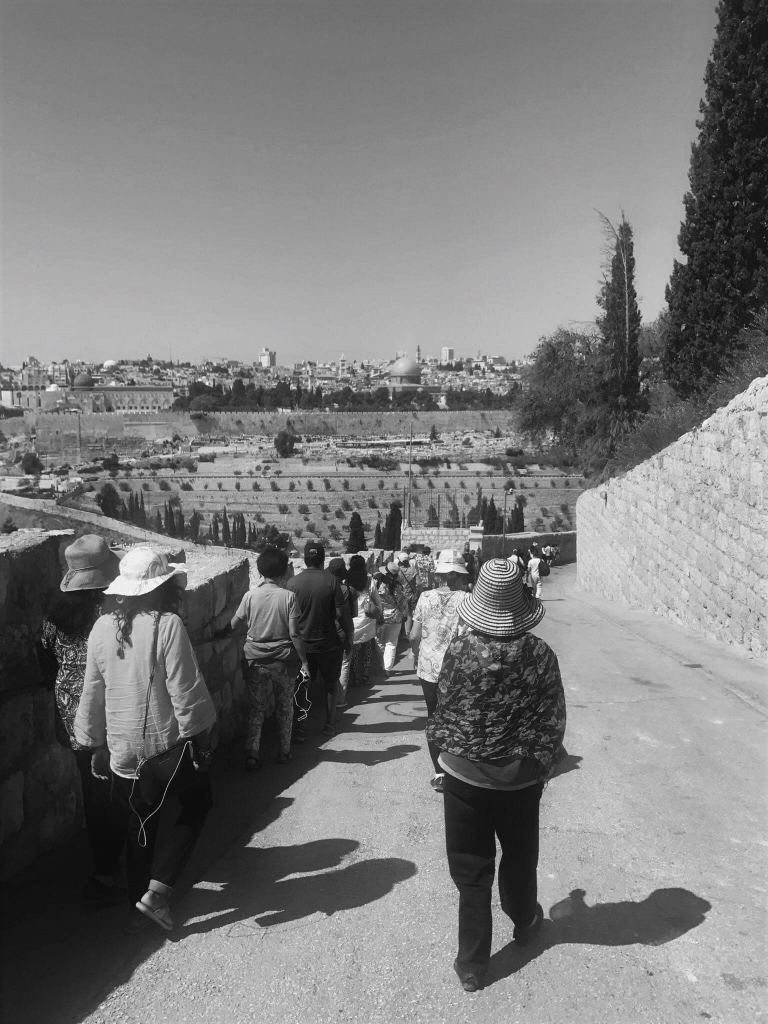 During Jesus’ time, the Mount of Olives was covered with olive trees, giving it its name. This mount is not only a geographical link between the desert and the lush hills of Jerusalem – it is also the spiritual link between heaven and earth or life and death. It was here that Jesus encouraged His disciples giving them their instructions for the time after He would be crucified. The Olivet Discourse is another infamous sermon taught here in which Jesus prophesised what would come in the last days. At the bottom of the Mount of Olives is an ancient olive garden, the garden of Gethsemane, where Jesus spent the night before He was arrested.

Tourers descending the slopes of the Mount of Olives

View of the graves half way down the Mount 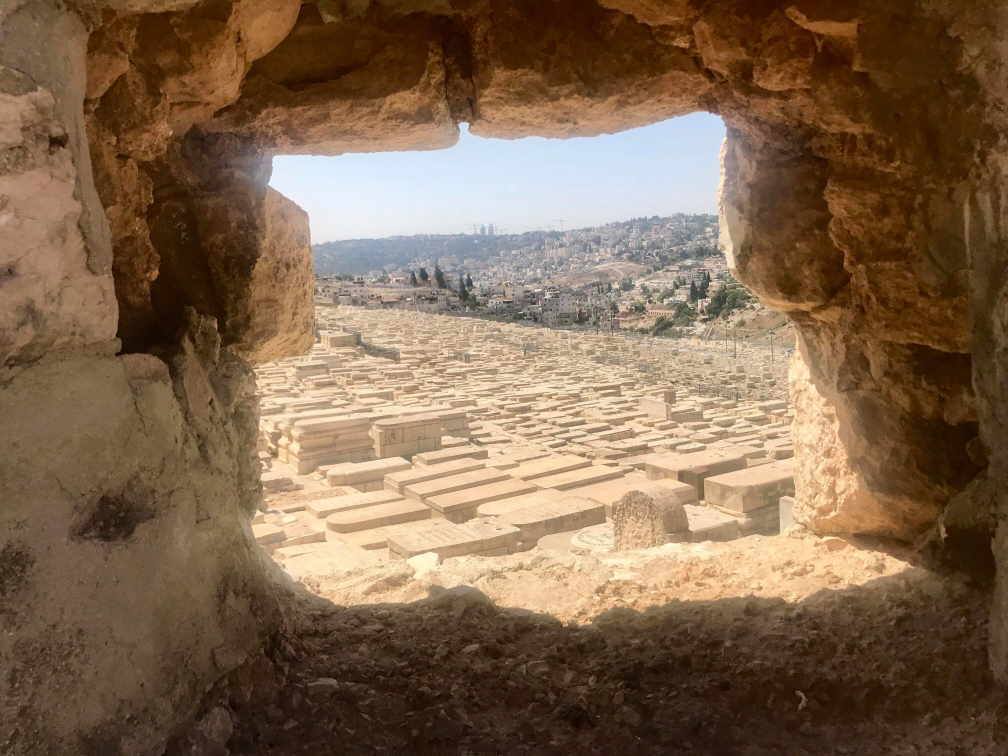 John 5:28  Do not marvel at this; for the hour is coming in which all who are in the graves will hear His voice and come forth—those who have done good, to the resurrection of life, and those who have done evil, to the resurrection of condemnation.  I can of Myself do nothing. As I hear, I judge; and My judgment is righteous, because I do not seek My own will but the will of the Father who sent Me – JESUS 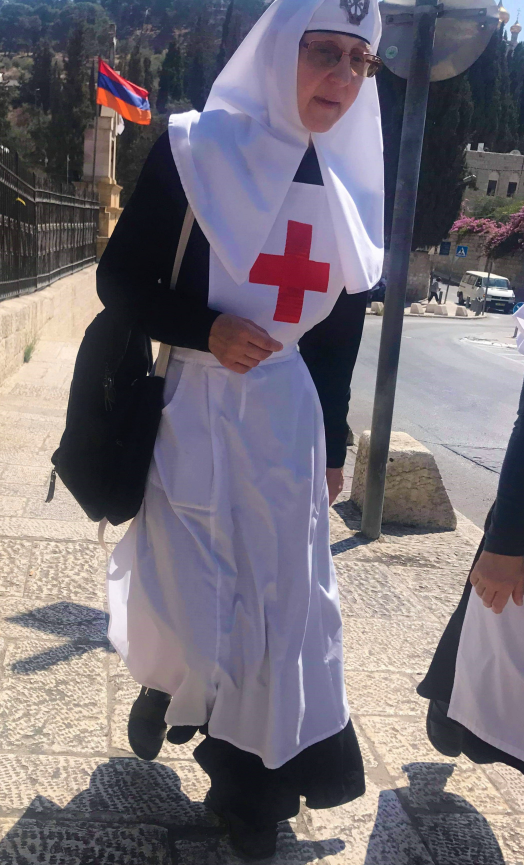 Matthew 6:1  “Take heed that you do not do your charitable deeds before men, to be seen by them. Otherwise you have no reward from your Father in heaven” – JESUS

Eastern Orthodox nun near the site of the garden of Gethsemane 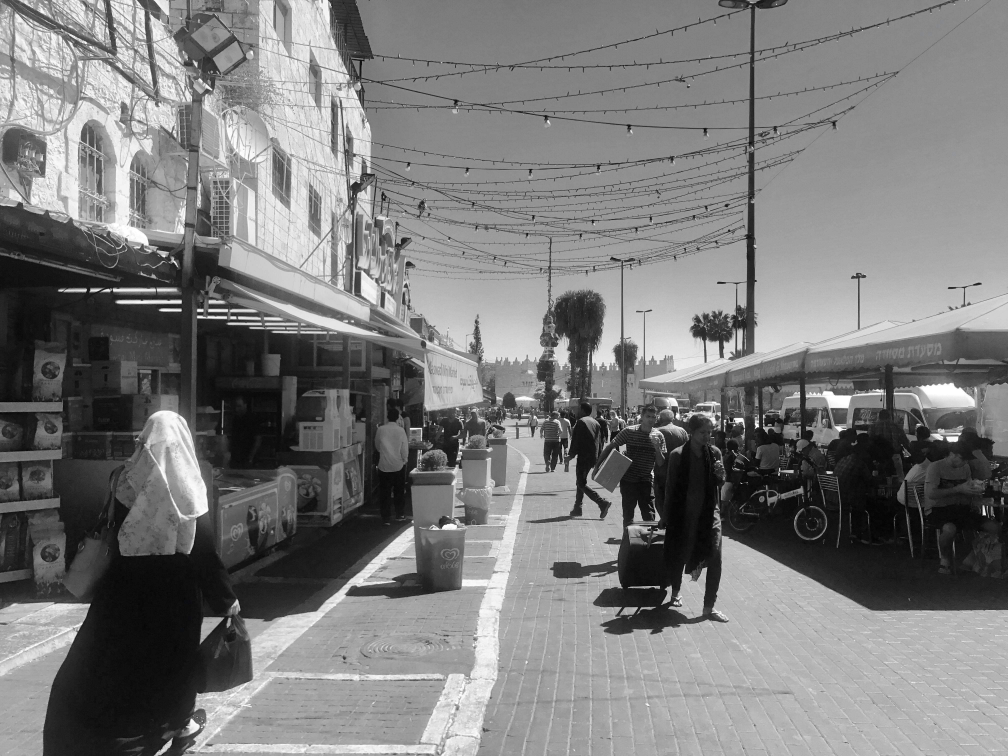 Called “Sultan the Magnificent” by Westerners Sultan Suleiman, ruler of Turkey, was an astute politician, talented administrator and an outstanding military strategist. In 1517 he conquered Jerusalem. At that time there were no fortifications protecting the city as the Crusaders had demolished the walls during their assault in the 11th century and 100 years later, Saladin destroyed what was left.  Legend has it that some years later Suleiman had a nightmare, in which roaring lions chased him through a field, caught him, tore him to pieces and greedily devoured him. Waking up in a cold sweat, Suleiman cried out for his counsellors. “What do you make of this horrible dream?” They replied, “It means that you must do something for Jerusalem,” they explained. “You must rebuild its crumbling city walls.” Whether or not the story is true, in 1538 he built the four-kilometer long, 12-meter high walls that still surround the Old City today.

Along Sultan Suleiman Street Leading to the Garden Tomb cafes and stalls line the route.

Whilst there is some dispute over Jesus' place of death and burial.. this is quite possibly the most peaceful place on earth 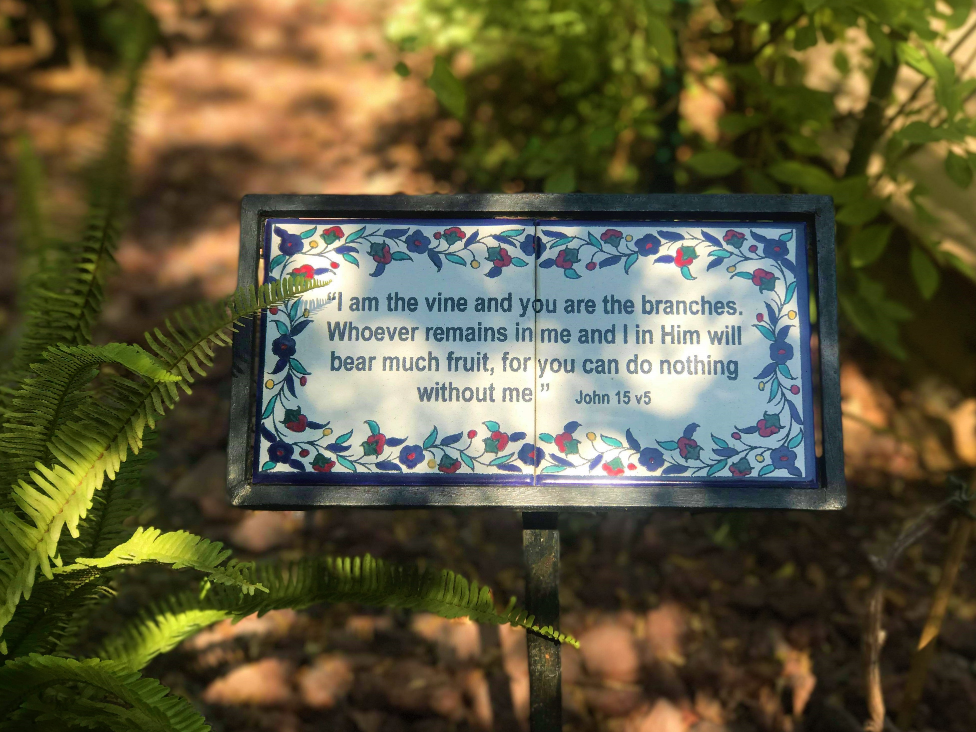 John 19:41  Now in the place where He was crucified there was a garden, and in the garden a new tomb in which no one had yet been laid. So there they laid Jesus, because of the Jews’ Preparation Day, for the tomb was nearby. 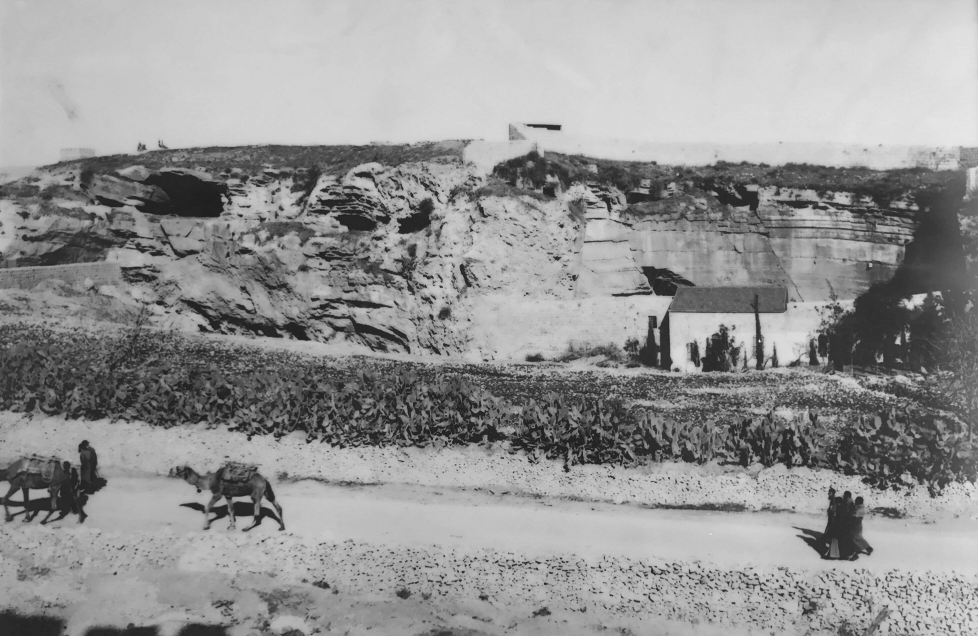 In 1883, British soldier, General Charles George Gordon, went on extended leave in Jerusalem. A devout Christian, he stayed for a while at what is now the American Colony Hotel. One day, looking north, he caught sight of a cemetery on top of a cliff. Beneath, in the rock, there were two caves.  In the late afternoon sun, the cliff with its cavernous “eyes” seemed to resemble a skull, and he became certain that this was Golgotha (Calvary) where Jesus was crucified. On further investigation he discovered an ancient tomb and a garden behind the hill, each suited to the New Testament description of Jesus’s burial place.

The Place of the Skull or Golgatha or Calvary

I wanted to visit the grave of Derek Prince an old time teacher of the Word. We met a wonderful woman there who guided us through the paintings on the walls. 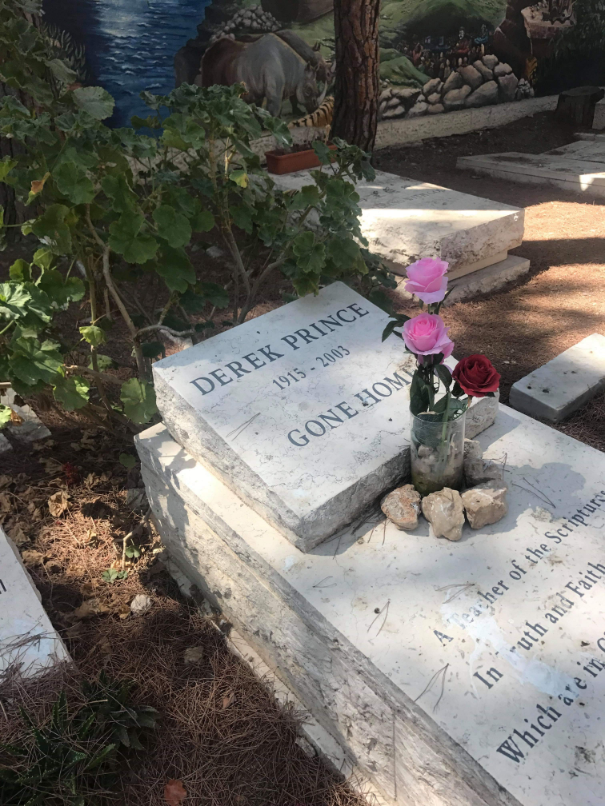 Psalm 49:15  But God will redeem my soul from the power of the grave, For He shall receive me.

Alliance Church International Cemetery, located in Jerusalem, is a unique graveyard where many of the heroes of faith have been laid to rest. 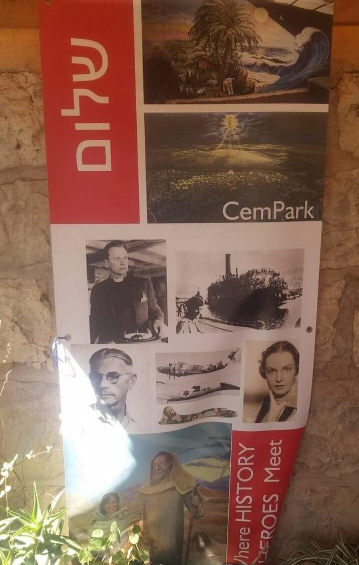 Psalm 89:48  What man can live and not see death? Can he deliver his life from the power of the grave?

Other hereos of the faith buried here are: Rev. John Stanley Grauel, considered to be one of the people directly responsible for the emergence of the state of Israel; Charles T. Winters, assisted Israel in their war for Independence by supplying several WWII planes. He had to spend time in prison as a result of his heroic efforts to help Israel. 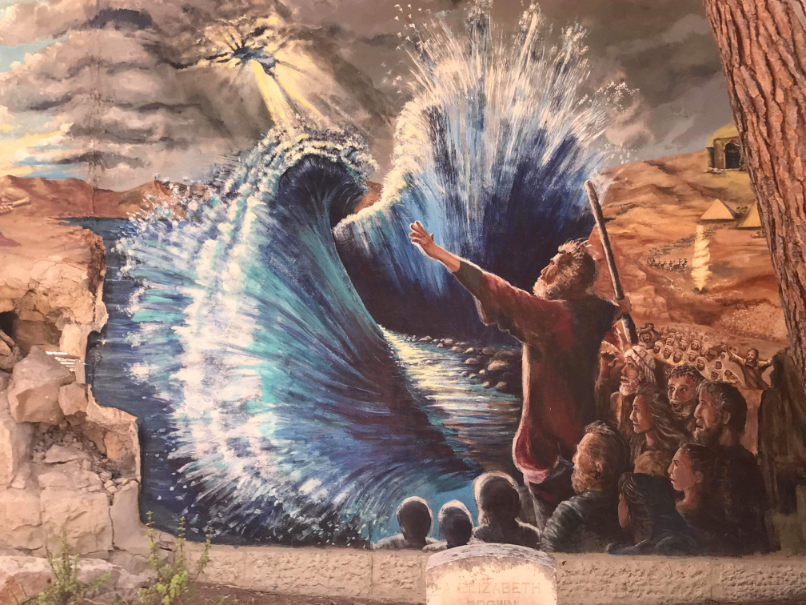 Small part of the Mural at Cem Park

Lining the football-field-sized cemetery’s internal walls is a colourful mural depicting the stories of the Bible from Genesis to Revelation.  Carl and Patricia Solveson have spent six and a half years painting the colorful scenes for people to connect with this magnificent love story contained in the Bible.

From Genesis to Revelation the paintings tell the story 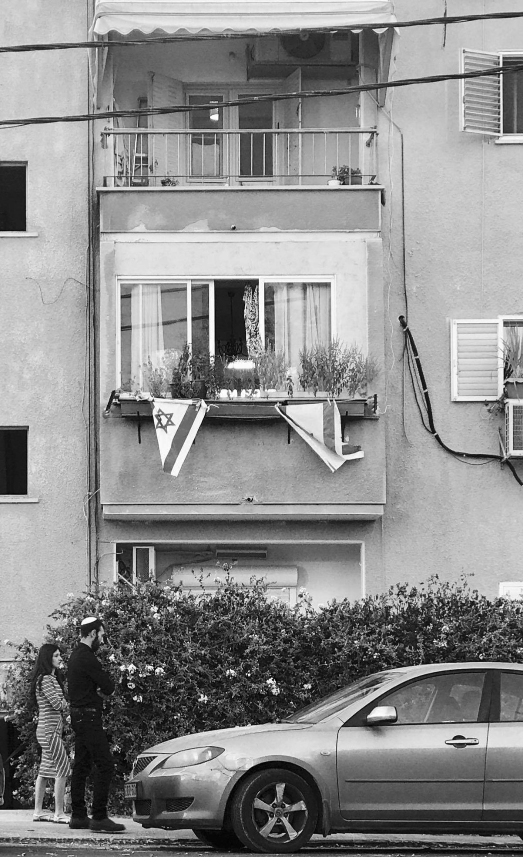 Jerusalem, Holy City of the Future

Apartments in the Rassco district of outer Jerusalem