In September 2018, I had the wonderful privilege of fulfilling a lifelong dream of taking a trip to Israel.  Four of us hired a car and traveled through Israel staying in Air B & B’s at the three main sites of Jaffa, Galilee and Jerusalem.  It was a very precious time and as many speak of – your Bible truly comes alive after visiting these places that are mentioned.  Hope you enjoy and take something with you as you look through. 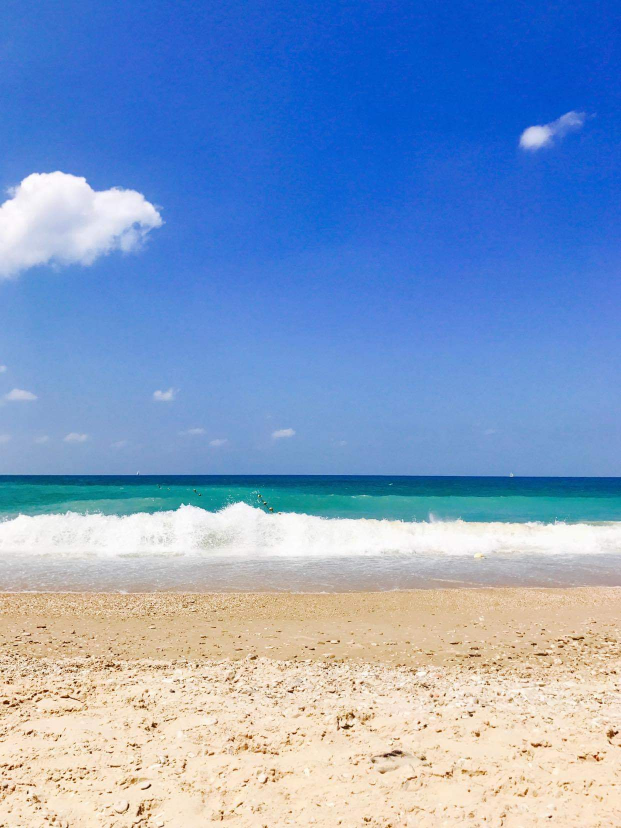 Our first stop was in the Old Town of Jaffa or Joppa as was called in Biblical times.  The beach here was the perfect resting place for a few days. 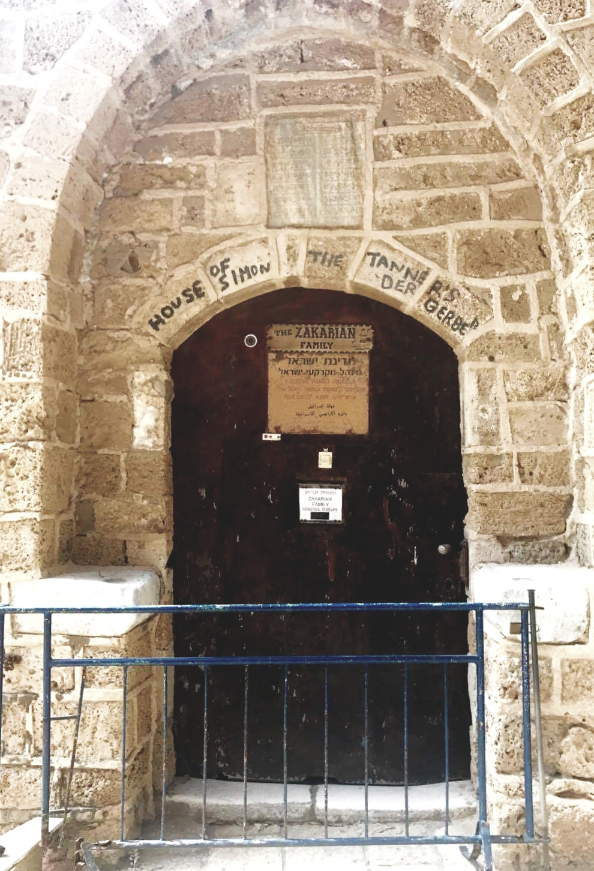 Acts 9:36  At Joppa there was a certain disciple named Tabitha, which is translated Dorcas. This woman was full of good works and charitable deeds which she did. But it happened in those days that she became sick and died. When they had washed her, they laid her in an upper room… Then Peter arose and went with them. When he had come, they brought him to the upper room. And all the widows stood by him weeping, showing the tunics and garments which Dorcas had made while she was with them. But Peter put them all out, and knelt down and prayed. And turning to the body he said, “Tabitha, arise.” And she opened her eyes, and when she saw Peter she sat up. Then he gave her his hand and lifted her up; and when he had called the saints and widows, he presented her alive. And it became known throughout all Joppa, and many believed on the Lord. So it was that he stayed many days in Joppa with Simon, a tanner.

Sadly the reputed site of Simon the Tanner's house is in disrepair and not accessible. But to stand there knowing that Peter probably had stood in the same spot was an extraordinary feeling. But it was here that Simon received the vision and call to preach to the Gentiles of the gospel of Christ. 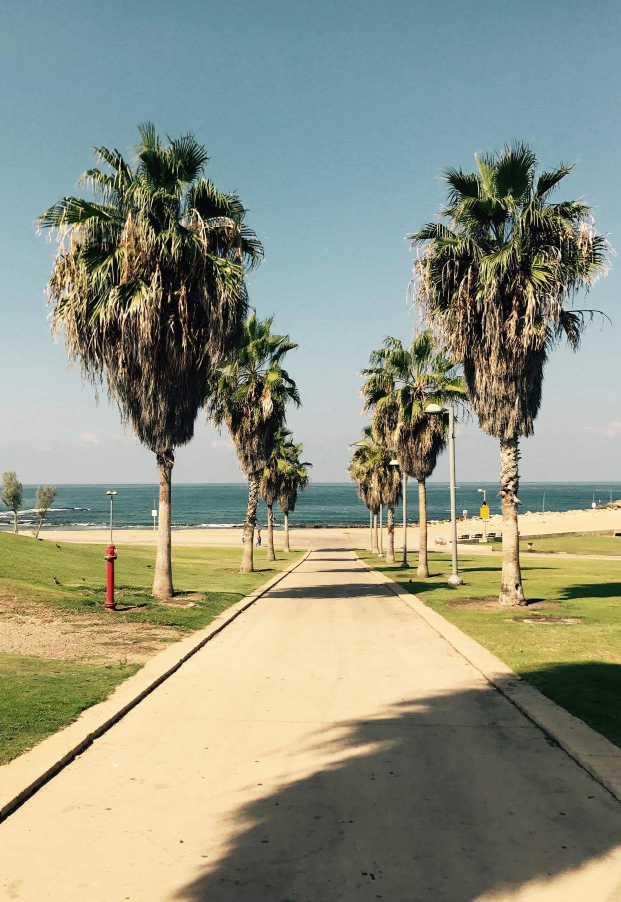 2 Chronicles 2:16  And we will cut wood from Lebanon, as much as you need; we will bring it to you in rafts by sea to Joppa, and you will carry it up to Jerusalem.

Jaffa or Joppa in Biblical times

Palm tree lined paths linking the towns along the Mediterranean between Jaffa and Tel Aviv. 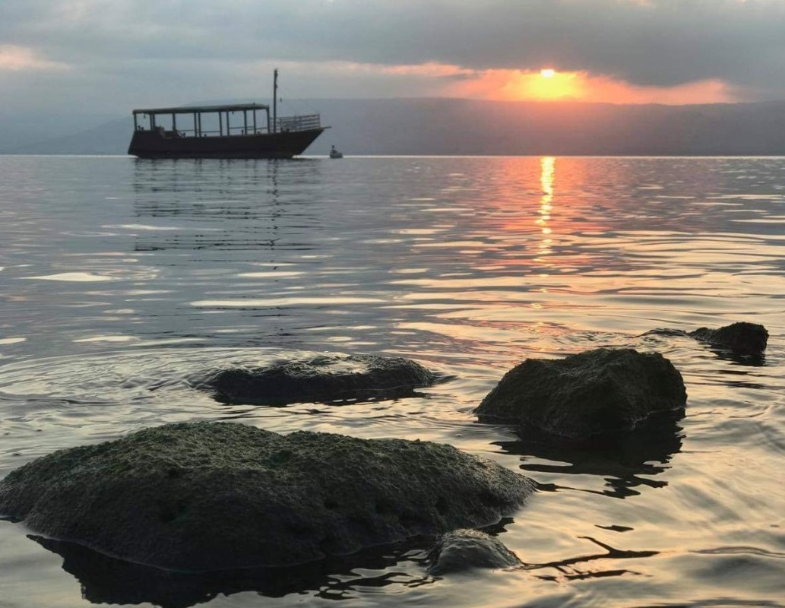 From Jaffa we made our way to the Sea of Galilee staying a stone’s throw from the water’s edge in Tiberias. I have never experienced peace like it.  Like a portal to heaven this area pulsates with an atmosphere that is hard to describe in words.

Watching the sunrise by the shore of Galilee 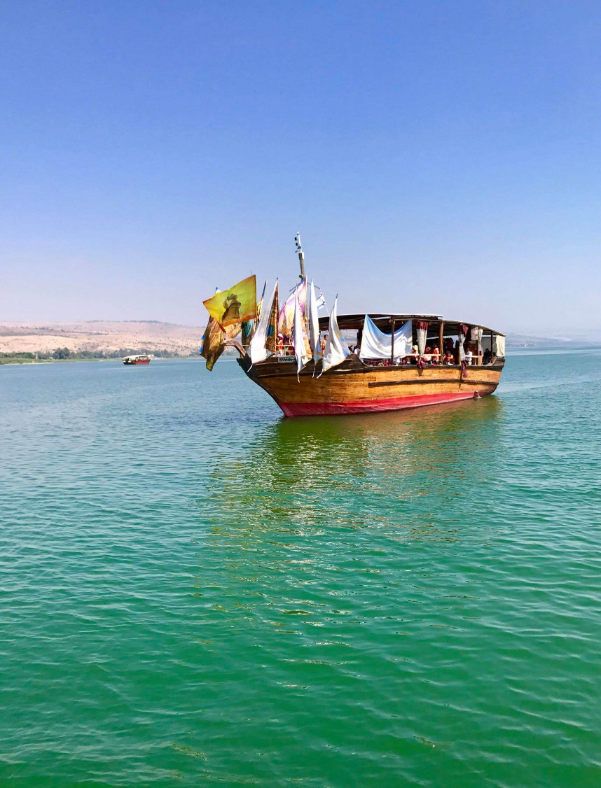 Matthew 4:18  And Jesus, walking by the Sea of Galilee, saw two brothers, Simon called Peter, and Andrew his brother, casting a net into the sea; for they were fishermen.

Many of the boats on the Lake today are of the traditional design that would have been similar to those in Jesus' day. 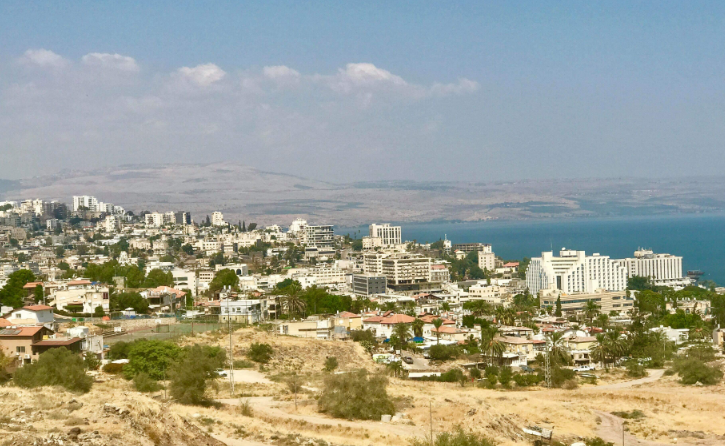 Tiberias on the Sea of Galilee

We were in Tiberias on Yom Kippur or the Day of Atonement. It is the most sacred and solemn day in the Jewish calendar. A day to reflect on the past year and ask God's forgiveness for any sins. 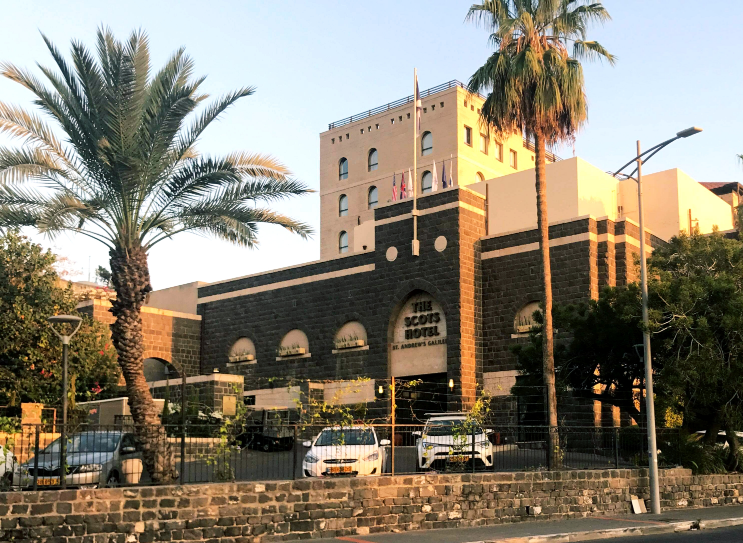 The Scots Hotel was once a medical centre established in the 19th century by Dr David Watt Torrance – a young Scottish doctor, who was head of the Church of Scotland’s mission to heal the people of the Holy Land.  He arrived in Tiberius in 1884 with the specific purpose of being available to all regardless of race or creed.  Dr Torrance lost two of his wives and four of his children due to the harsh living conditions and disease. Despite the tragic losses, the difficulties enforced by the Turkish authorities, the repercussions of World War 1, and a bad car accident – Dr Torrance cared for thousands of patients until his death in 1923.  His son, Dr Herbert Torrance joined him in 1921 and continued to run the hospital he retired in 1953.  On its closure, The Church of Scotland wanted to make use of the buildings and opened a guest house for pilgrims and visitors. In 1999 after a major refurbishment this 5 star hotel was launched. 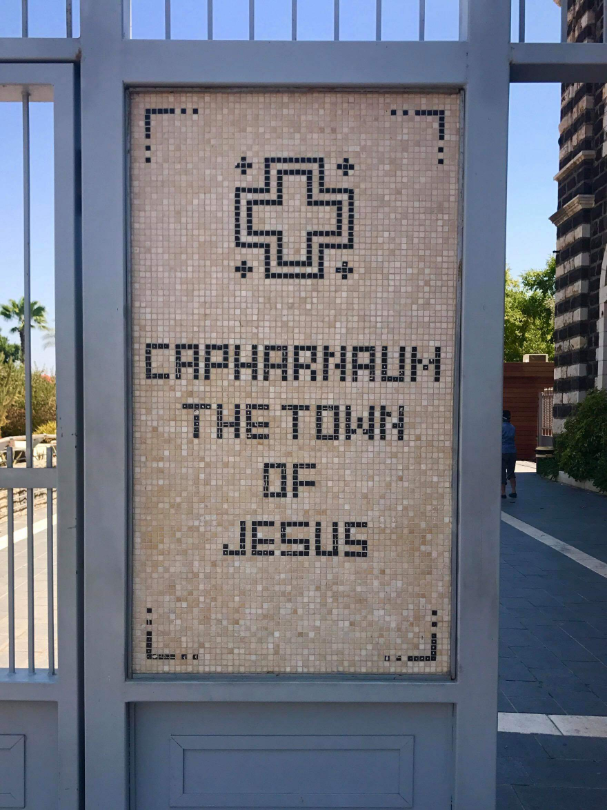 Matthew 11:23 And you, Capernaum, who are exalted to heaven, will be brought down to Hades; for if the mighty works which were done in you had been done in Sodom, it would have remained until this day

From Tiberias we were able to visit the ruins of Carpernaum. The town that Jesus stayed in when in that region. 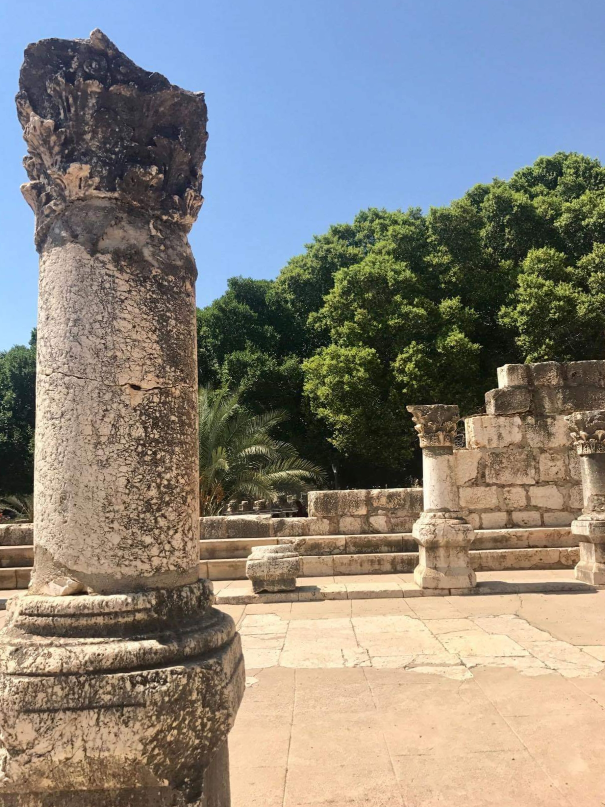 Mark 1:21  Then they went into Capernaum, and immediately on the Sabbath He entered the synagogue and taught.

This is the site of the original Synangogue where Jesus taught 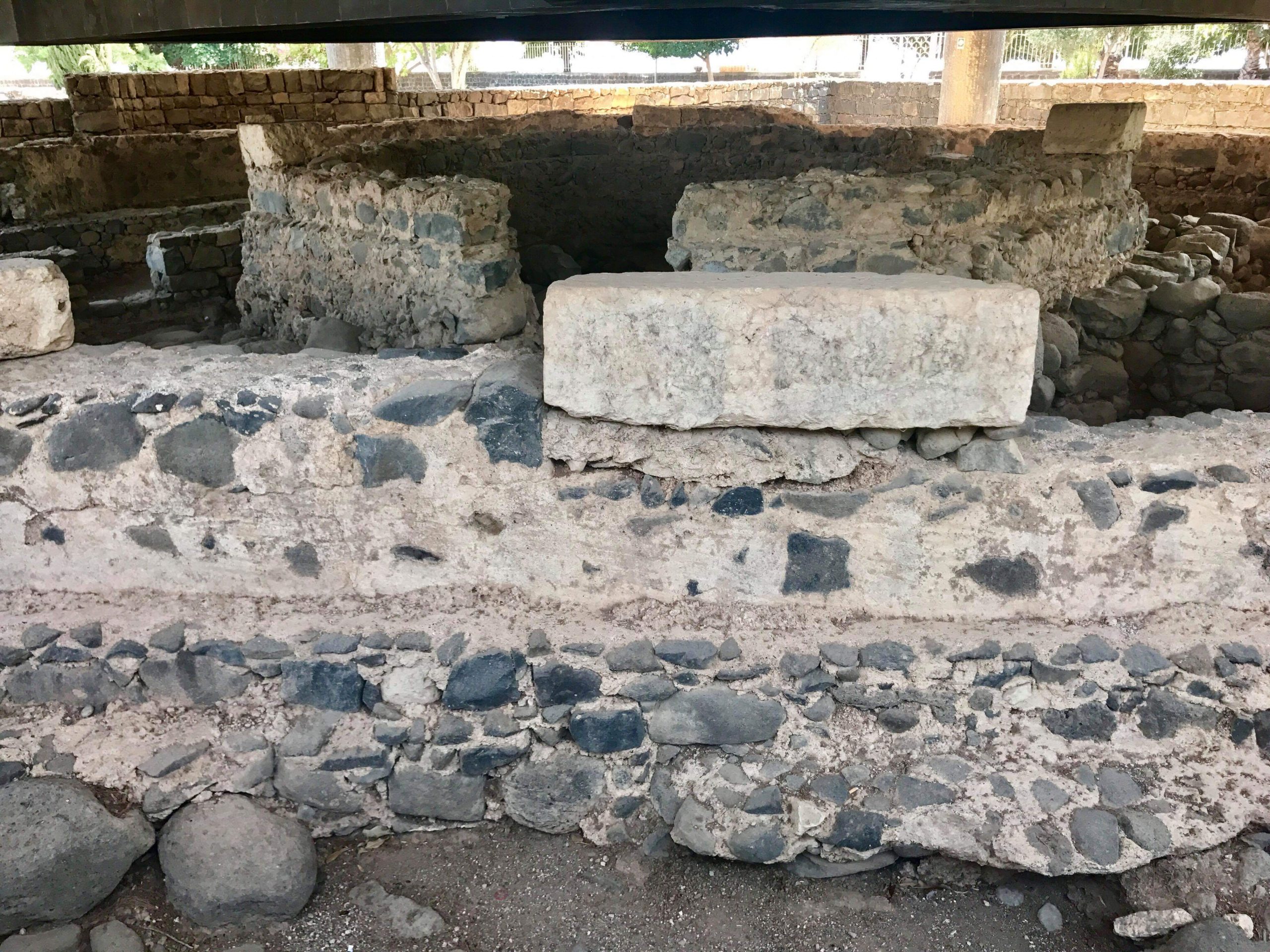 Mark 2:1  And again He entered Capernaum after some days, and it was heard that He was in the house.

The site of Peter's house where Jesus resided when in Capernaum. 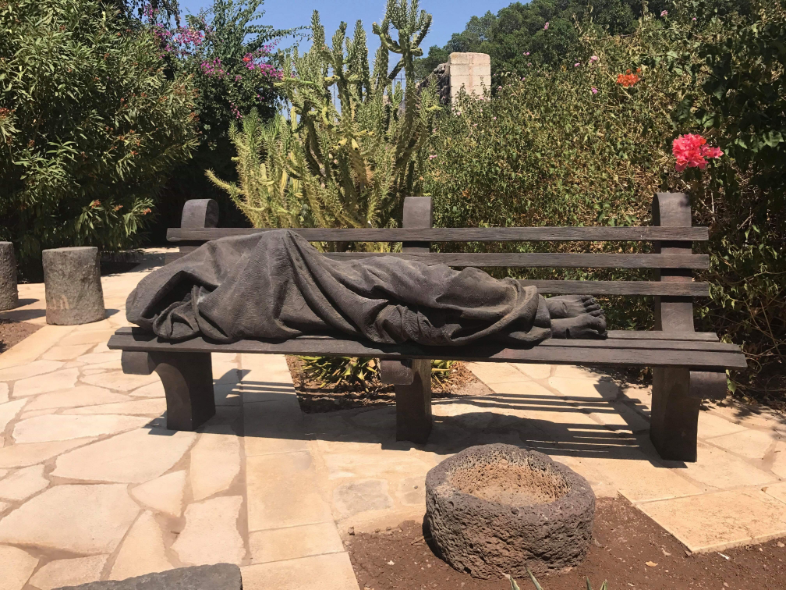 The Canadian sculptor, Timothy Schmalz, depicted Jesus as a homeless person, sleeping on a park bench. Whilst his hands and face are obscured under a blanket, wounds from the cruxification on his feet disclose his identity.  Schmalz planned for the sculpture to be provoking, admitting, “That’s essentially what the sculpture is there to do. It’s meant to challenge people.” Many others have been placed around the world including one in St. Anne’s Square in Manchester.

Matthew 25:40 And the King will answer and say to them, ‘Assuredly, I say to you, inasmuch as you did it to one of the least of these My brethren, you did it to Me. 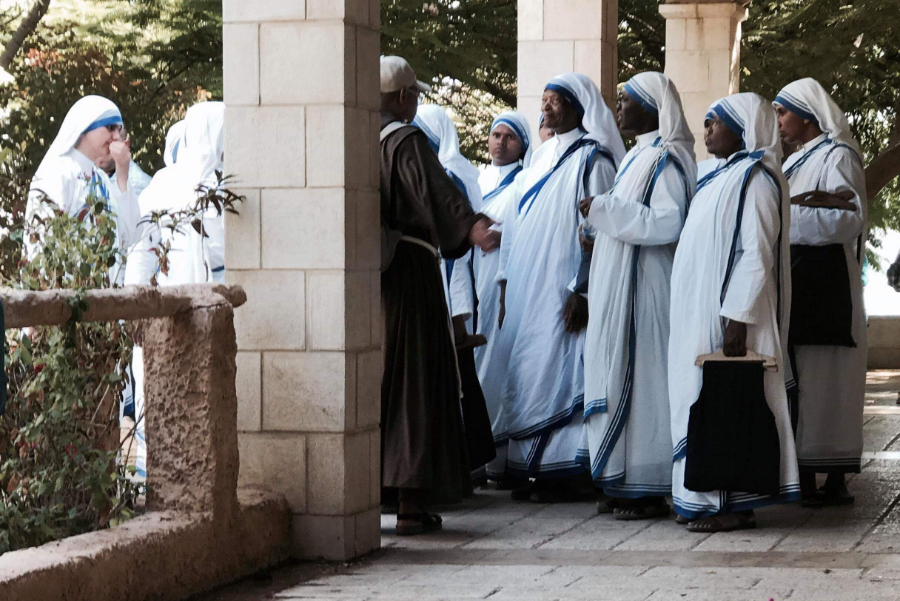 Matthew 5:1-12  And seeing the multitudes, He went up on a mountain, and when He was seated His disciples came to Him. Then He opened His mouth and taught them.

From Capernaum to the Mount of Beatitudes where tourists, pilgrims and religious orders of many kinds visit 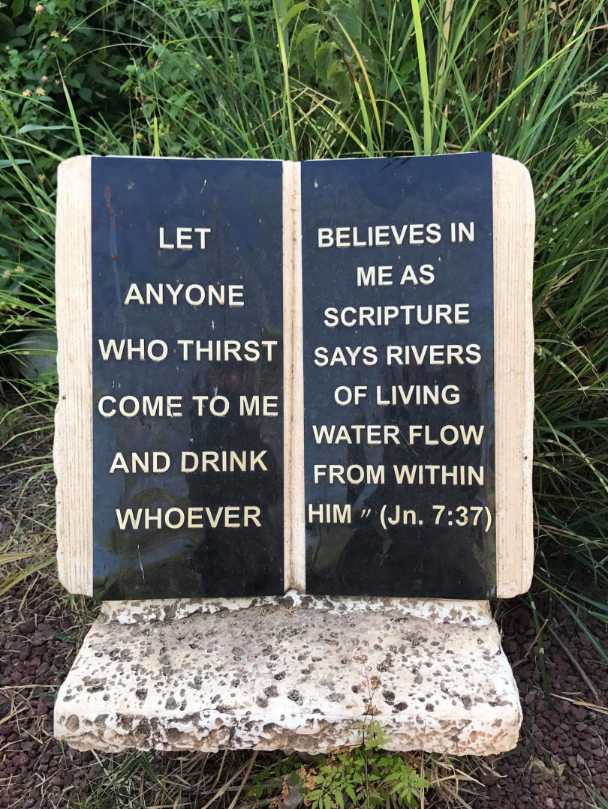 Scripture lines the pathway leading to the Church of the Beatitudes 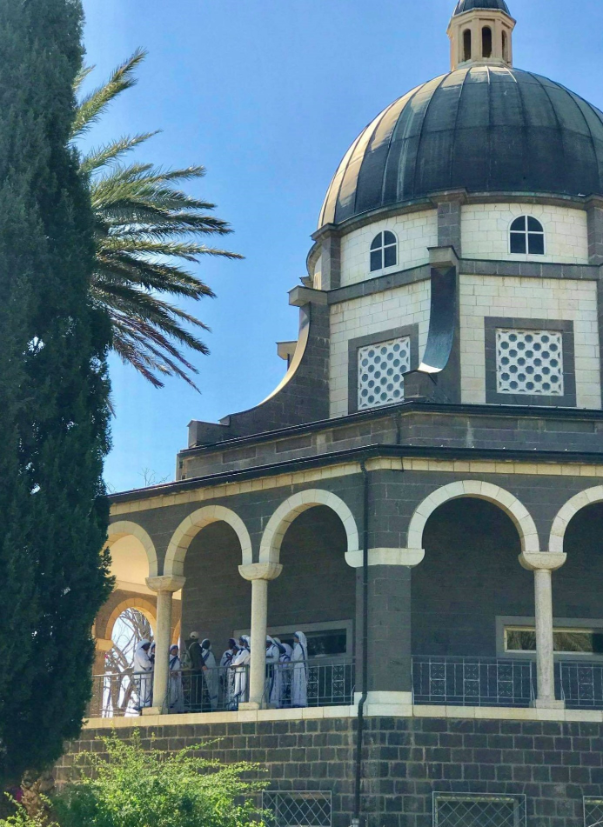 Church of the Beatitudes 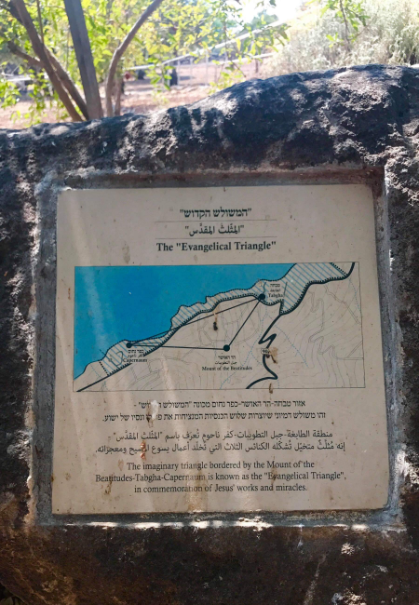 Jesus spent most of his ministry in what has been called ‘The Evangelical Triangle.’  This is a small geographic area containing the area between the biblical cities of Capernaum, Korazin and Bethsaida.  Jesus chose to make his home in Capernaum fulfilling fulfill Isaiah 9:1 which says: Nevertheless the gloom will not be upon her who is distressed, As when at first He lightly esteemed. The land of Zebulun and the land of Naphtali, And afterward more heavily oppressed her, By the way of the sea, beyond the Jordan, In Galilee of the Gentiles.  The people who walked in darkness
Have seen a great light; Those who dwelt in the land of the shadow of death, Upon them a light has shined.

Jesus fulfilled this prophecy with incredible accuracy, although it was written over 700 years before his coming.  Jesus is the “great light” in Isaiah.  Also, the roadway Isaiah mentions called the “Way of the Sea” ran through Capernaum as a highway in Jesus’ time.  A Roman mile marker designating this route can still be seen today in Capernaum’s ruins.  The prophet also mentions two tribal lands, Zebulun and Nathpali.  It is of note that while Nazareth was located in the tribal area of Zebulun, the area of Capernaum fell within the ancient tribal boundaries of Naphtali.  Jesus precisely fulfilled the prophet’s words by spending his boyhood in Zebulun and much of his ministry in Naphtali. 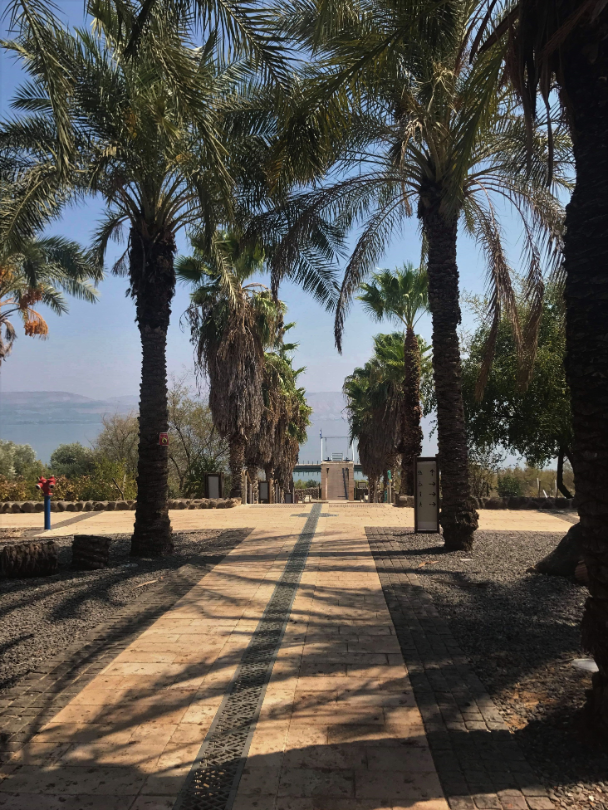 John 6:24  when the people therefore saw that Jesus was not there, nor His disciples, they also got into boats and came to Capernaum, seeking Jesus. 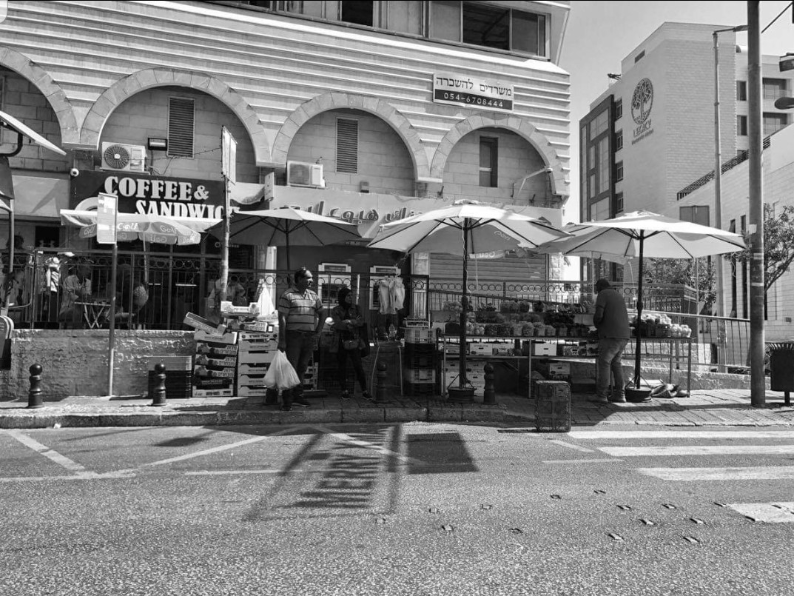 Matthew 2:23  And he came and dwelt in a city called Nazareth, that it might be fulfilled which was spoken by the prophets, “He shall be called a Nazarene.”

We drove to Nazareth in search of Jesus' home. Unfortunately all we met was intense traffic and no where to park.. but caught this snap of a small market stall.. on the ground a curious reflection of 'Merry xmas' - in september, in israel? 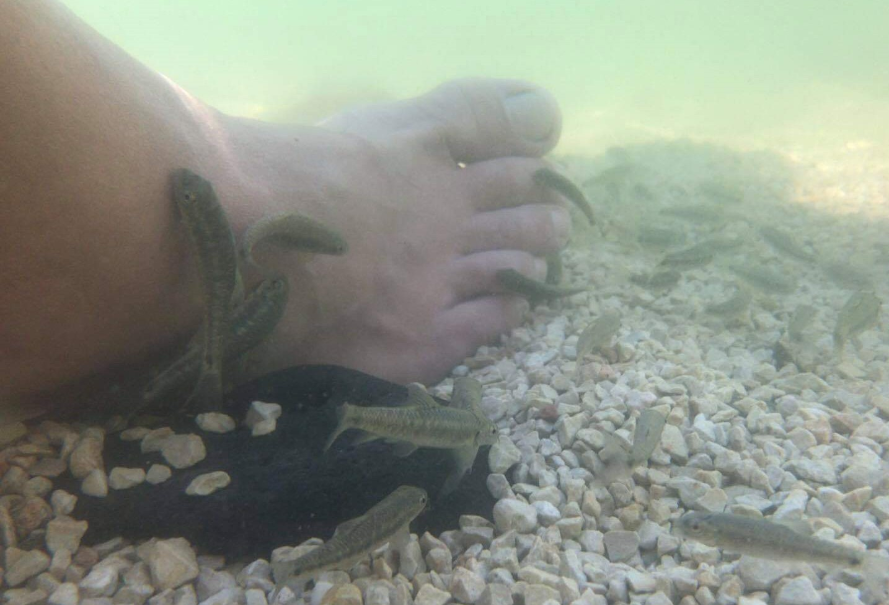 The Sea of Galilee (apart from offering free pedicures) is the largest fresh water lake situated in north-eastern Israel, near the borders with Jordan and Syria.  It is 64 square miles, provides a third of Israel’s drinking water and also provides a commercial source of fishing.  It is known by a variety of names and due its shape is often referred by Israelis as the “Kinneret,” which is the Hebrew word for ‘violin’.  The most famous sermon on the Mount was given on the lake’s north-western shore.  It is known for its sudden violent storms from the East winds from over the Golan Heights, the storm that Jesus quelled with His Word. 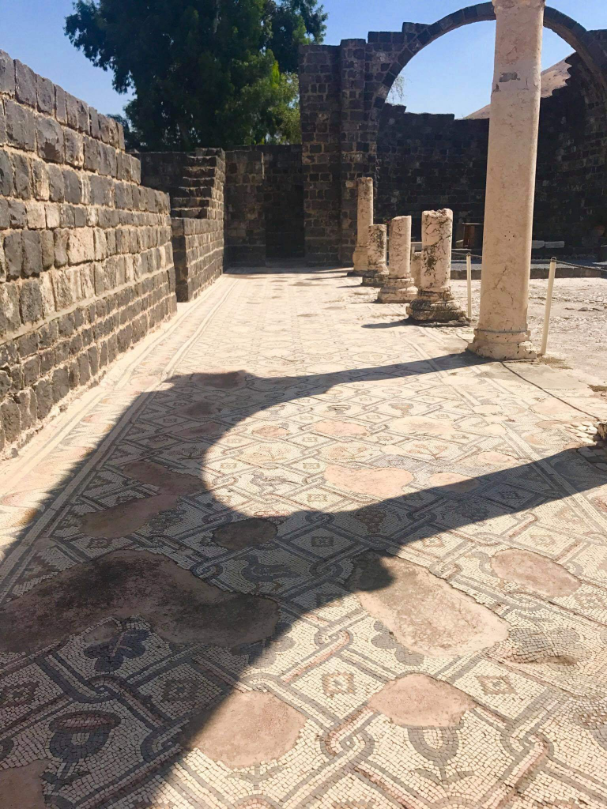 Matthew 8:28  When He had come to the other side, to the country of the Gergesenes, there met Him two demon-possessed men, coming out of the tombs, exceedingly fierce, so that no one could pass that way. And suddenly they cried out, saying, “What have we to do with You, Jesus, You Son of God? Have You come here to torment us before the time?”  Now a good way off from them there was a herd of many swine feeding.  So the demons begged Him, saying, “If You cast us out, permit us to go away into the herd of swine.”  And He said to them, “Go.” So when they had come out, they went into the herd of swine. And suddenly the whole herd of swine ran violently down the steep place into the sea, and perished in the water.

On the other side of the Sea of Galilee is Kursi, Gergesenes. Here is the ruins of a Christian monastery and small village is the biblical Gergesa. Today this place is an Israeli national park located in the Golan Heights.